By Tim Priebe on

If you’re running an email newsletter, or considering starting one, there are a lot of options out there to choose from. The decision making process isn’t always easy. But we at T&S have consistently recommended MailChimp for the last few years.

Here are a few features that may resonate with you. At the very least, they’re features I’ve found useful.

If you use one of MailChimp’s built in basic templates, you’ll have access to their Email Designer. Part of what that lets you do is drag and drop various content blocks to where ever you want them in your email.

Compared to even just a year ago, this makes creating new campaigns in MailChimp much, much easier and quicker. 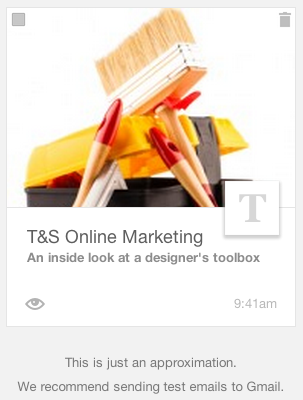 In March 2014, Gmail introduced a new, more visual way for users to view their Promotions tab. Since many email newsletters get automatically placed in that tab, it’s hugely important to control how that looks.

Enter MailChimp’s Social Card preview. They’ll show you what that will look like, approximately, and let you customize what goes where. Plus, you can also customize how it looks when your email is shared on Facebook or Twitter.

As of this writing, the visual view of the Gmail promotions tab is only available to a select few. 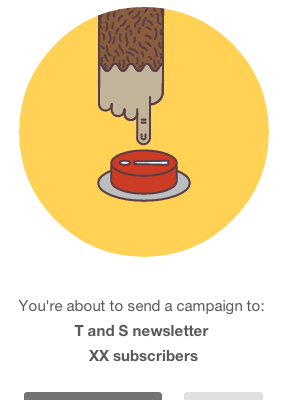 This is probably my single favorite feature, largely because it has saved my bacon on more than one occasion.

Here at T&S, it doesn’t matter if we’re working on our clients’ emails or our own in MailChimp. 99.9% of the time, we pre-schedule them to go out at some point in the future. In fact, often the email contains links that won’t even work until a later date.

So you can imagine my horror in the past when I’ve accidentally clicked the “Send” button instead of the “Schedule” button.

Fortunately, I’m apparently not the only one, because MailChimp introduced a warning screen when you’re sending an email out instantly. And that one small step has saved me on more than one occasion?

Programming nerd bonus: The animated image of the monkey waiting to push the red button is entirely CSS generated. Awesome!

Use MailChimp yourself and like other features? Maybe it’s something about the reporting, or the ability to do A/B testing.

Looking for help with email newsletters? Check out how we can help.

Out of this world creative solutions